A few years ago a chubby Redpoll visited our feeder.

This antique dish had broken and I couldn’t part with it, so I put seed in it, and the redpoll adopted it.  He (or she) sat right in it and ate and ate and ate.  Like his full switch never got flipped.

He moved quite slow.  My husband and I figured that he was missing some kind of instinct or characteristic that gives birds their fast-twitch, jumpy nature.  Probably something that they need to survive.

He’s puffed up too because of the chilly weather, but this bird was quite unusual in that he was fatter, slower, and never flew away intermittently like the other birds.  He was totally content to eat continuously, rarely looking up.  This was the very last photo I took and out of at least 20, this is the only time I got him looking up.

After watching hundreds or even thousands of birds at the feeder over the years, this little guy’s behavior was profoundly different than all the others. 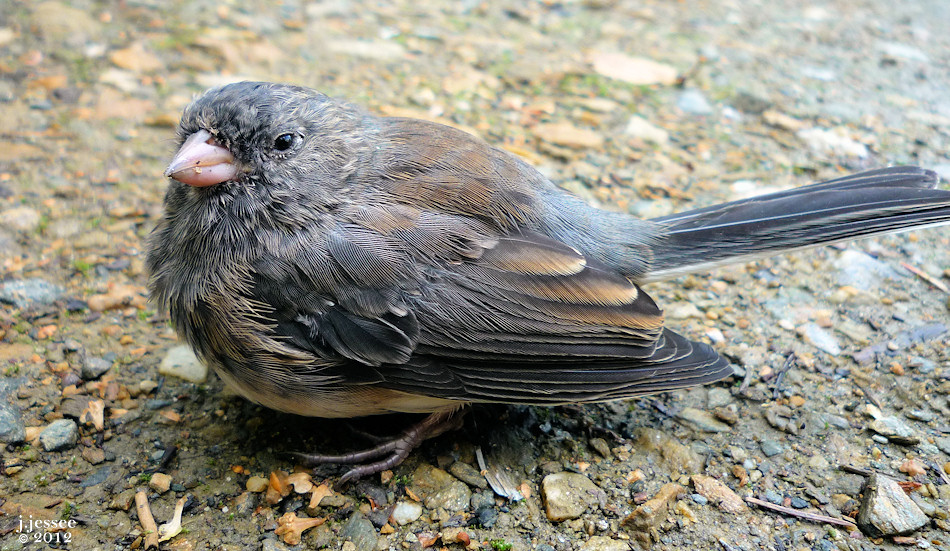 First seen in the winter of 1991-92, Black-Capped Chickadee beak deformities are now quite common, according to the Alaska Science Center.  To date, there have been over 2100 reports of chickadee beak deformities in Alaska, and only 31 outside of Alaska.  In the photo above, you can see that the chickadee’s beak is at least twice as long as it should be, and the bottom part is crossed and curved up.

The Northwestern Crow suffers from this malady as well, with an astounding 17% of adult birds in Alaska exhibiting some level of beak deformity (as opposed to 6-10% of adult Black-Capped Chickadees).

Other birds with reported beak deformities are the Black-Billed Magpie, Red-Breasted Nuthatch, and Stellar’s Jay – although none of these reports come anywhere close to the high number of sightings of the Black-Capped Chickadee.  Other species of chickadee have been seen with the problem too but they number under 10 total.  Whatever the source of the problem, Black-Caps are especially vulnerable to it.

This map (from alaska.usgs.gov) shows locations of Black-Capped Chickadee beak deformity sightings.  At first they were centered around Bristol Bay and the Mat-Su Valley but they soon spread to Fairbanks (where I live) and elsewhere.  There are plenty of sightings in remote locations so the problem does not exist only in populated areas.

The poor creatures with deformed beaks often have a very hard time eating – it’s actually kind of amazing that they do get by at all.  The one on the right kept rubbing the elongated portion of its beak on the wood of our feeder, as if attempting to rub it off.  No doubt feeders and even garbage help to keep them alive but mortality is undoubtedly higher among them.  Normal preening is greatly disrupted.  And though many of them do find a mate and breed, fewer eggs hatch to a pair in which the female is deformed and fewer young survive when the male is deformed.

On the left is an example of a normal beak.

My most recent “new bird” was the Pine Grosbeak, which came to the sunflower seed hearts laid out on our deck railing on October 13th 2011.  When you first start being interested in birds it’s like every one you see is a “new bird” to you.  And though Pine Grosbeaks are not uncommon here in Fairbanks, I never came across one until now even after 6 or 7 years of birding.

Pine Grosbeaks are plump colorful finches about the size of robins and they live in Alaska all winter.

This one is either a female or immature male; adult males are bright red.  Their vocalizations are quite melodious.  This species is not endangered – it is somewhat common in northern coniferous forests.  It does venture down into the midwest and eastern states in winter sometimes.

Pine Grosbeaks are generally monogamous, forming pairs before arriving at their breeding grounds.  The female builds a nest, lays 3 or 4 eggs, and the male brings her food while she sits on them for about 2 weeks.  When they hatch, both parents feed them for another couple of weeks while in the nest, but they continue to beg for food even after leaving the nest.  I’m guessing this one is a young male, possibly searching for a flock to join because except for during breeding time they are usually seen in large flocks.  My husband and I enjoyed seeing this bird during an early snow with a dollop of snow on the tip of its beak.  Hope it found some friends!