First seen in the winter of 1991-92, Black-Capped Chickadee beak deformities are now quite common, according to the Alaska Science Center.  To date, there have been over 2100 reports of chickadee beak deformities in Alaska, and only 31 outside of Alaska.  In the photo above, you can see that the chickadee’s beak is at least twice as long as it should be, and the bottom part is crossed and curved up.

The Northwestern Crow suffers from this malady as well, with an astounding 17% of adult birds in Alaska exhibiting some level of beak deformity (as opposed to 6-10% of adult Black-Capped Chickadees).

Other birds with reported beak deformities are the Black-Billed Magpie, Red-Breasted Nuthatch, and Stellar’s Jay – although none of these reports come anywhere close to the high number of sightings of the Black-Capped Chickadee.  Other species of chickadee have been seen with the problem too but they number under 10 total.  Whatever the source of the problem, Black-Caps are especially vulnerable to it.

This map (from alaska.usgs.gov) shows locations of Black-Capped Chickadee beak deformity sightings.  At first they were centered around Bristol Bay and the Mat-Su Valley but they soon spread to Fairbanks (where I live) and elsewhere.  There are plenty of sightings in remote locations so the problem does not exist only in populated areas. 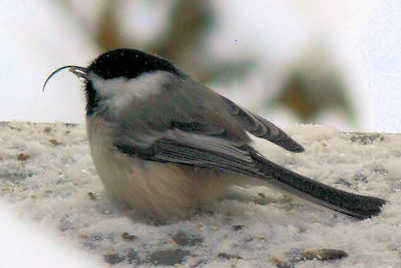 The poor creatures with deformed beaks often have a very hard time eating – it’s actually kind of amazing that they do get by at all.  The one on the right kept rubbing the elongated portion of its beak on the wood of our feeder, as if attempting to rub it off.  No doubt feeders and even garbage help to keep them alive but mortality is undoubtedly higher among them.  Normal preening is greatly disrupted.  And though many of them do find a mate and breed, fewer eggs hatch to a pair in which the female is deformed and fewer young survive when the male is deformed. 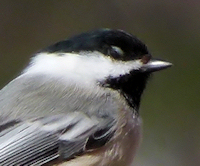 On the left is an example of a normal beak.