The average adult raven is about 2.5 pounds and it’s hard to tell adults from juveniles.  The below video shows a power struggle between ravens at a food source.  At the very beginning you can see a raven on the far left grab another raven’s tail feathers with his beak and pull him or her away from the food.  Another seems to join in.  (By the way, if the video is blurry find the settings in the bottom right hand corner of the player and change it to a higher resolution.  Youtube automatically chooses a low setting so it will download faster.)

After reading Ravens in Winter, a book by Bernd Heinrich, I’m inclined to believe that the commotion going on in the video has to do with a power struggle (to gain access to the food) between the juvenile birds and the adults.  According to Heinrich, adults are usually silent at carcasses (dead animals in the wild), and juveniles are very noisy.  The juveniles “yell” at kills and make a commotion, possibly to attract more juveniles to the kill, in order to compete with the adults and gain access to the food.

Heinrich “proves” through observation and careful note-taking that ravens actively recruit other ravens to food piles.  He speculates, after studying raven behavior for many years, that this recruitment is not necessarily altruistic, or done in order to get the favor back some day.  Instead, it is probably related more to “gaining or maintaining access to the food than to sharing the wealth.”

Juveniles actively recruit, in order to overwhelm by sheer numbers, the adults at the carcass, so that the adults will give up defending the carcass, which they do when they are just too outnumbered.

So if we can extend this power struggle at carcasses in the field to city food (trash) then it’s possible the squawking raven in the video, the one being pulled from the food by his or her tail feathers, is likely a juvenile, being bossed around by the adults, who are not as vocal.

I strongly encourage any bird lover to read Ravens in Winter.  This bird that I see nearly every day of my life is actually quite mysterious and Heinrich helps us understand their possible and likely motivations.

Thanks for reading!  Happy New Year!

I don’t think this is a very common sight on the coastal plains of northern Alaska (or anywhere?), but as my husband drove in to Prudhoe Bay last spring, he spied this unusually large gathering of various birds.

The rough-legged hawk and raven seem to be acting as sentries over the vast flocks, but they are watching for sinister purposes.

Sure enough,  a hawk has gotten herself a meal.

But really, how can you blame her? 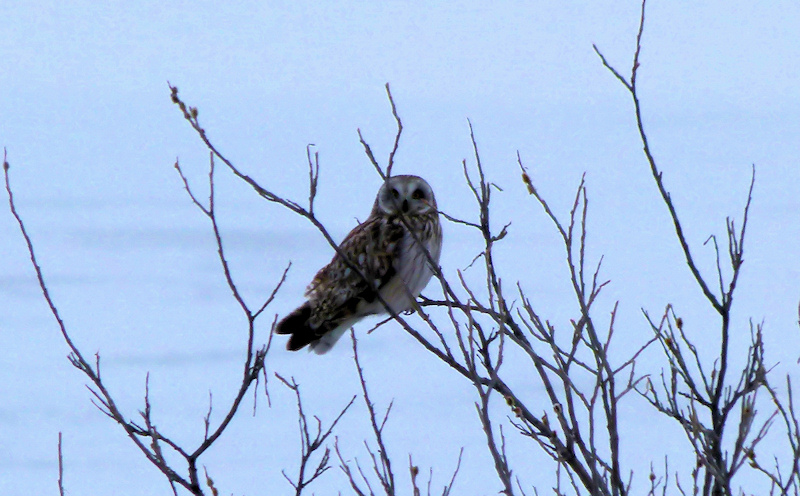 A short-eared owl perches nearby.

Kind of hard to believe that little twig can hold him up.  He must be all fluff.

And life goes on….

I’m happy to say my husband caught the birding bug!  He took this photo of a juvenile redpoll.  I would even go as far as calling it a baby redpoll.  It’s hard to tell how tiny it is, but he said just a couple inches, really small.  The short tail feathers probably enhance the tiny effect.

We’re a bit surprised that there are fledged redpolls this early in the spring.  It stopped snowing less than 2 weeks ago!  And now it’s 70 degrees, go figure.  Either way, my husband said this little guy flew away,barely, so maybe he or she will have a fighting chance.

It’s amazing that any pigeons at all make it through our frigid Fairbanks winters.

This year we saw several weeks of sustained 30-40 below zero (F) weather and they are still flying around!  (This photo was taken when it was about 30 below.)

They perch at night in attics and eaves, and sometimes in trees.  Some nice people throw seed on the ground outside their homes throughout the winter, and the birds congregate in those places during the day.   Not so much different then me feeding little redpolls and chickadees I suppose!

My most recent “new bird” was the Pine Grosbeak, which came to the sunflower seed hearts laid out on our deck railing on October 13th 2011.  When you first start being interested in birds it’s like every one you see is a “new bird” to you.  And though Pine Grosbeaks are not uncommon here in Fairbanks, I never came across one until now even after 6 or 7 years of birding.

Pine Grosbeaks are plump colorful finches about the size of robins and they live in Alaska all winter.

This one is either a female or immature male; adult males are bright red.  Their vocalizations are quite melodious.  This species is not endangered – it is somewhat common in northern coniferous forests.  It does venture down into the midwest and eastern states in winter sometimes.

Pine Grosbeaks are generally monogamous, forming pairs before arriving at their breeding grounds.  The female builds a nest, lays 3 or 4 eggs, and the male brings her food while she sits on them for about 2 weeks.  When they hatch, both parents feed them for another couple of weeks while in the nest, but they continue to beg for food even after leaving the nest.  I’m guessing this one is a young male, possibly searching for a flock to join because except for during breeding time they are usually seen in large flocks.  My husband and I enjoyed seeing this bird during an early snow with a dollop of snow on the tip of its beak.  Hope it found some friends!