A Snow Bunting at Pictured Rocks

I saw a snow bunting once before, in Prudhoe Bay, Alaska.  In its summer garb.  But this one I spied on a gravel road in Pictured Rocks National Lakeshore in Michigan in its winter plumage. My husband and I were in the middle of a 6 week long road trip that started and ended at our home in Fairbanks, Alaska, but that took us through 4 Canadian provinces and at least 14 states.  And of all the amazing times we had this snow bunting was actually pretty special because it was one of the few close encounters with birds that I had over the whole 6 weeks.

Michigan’s scenery, little did I know, is astoundingly beautiful!  I had no idea there were sand dunes in the Midwest!  Sleeping Bear Dunes National Lakeshore (on left) is a must-see part of North America.

As is Pictured Rocks National Lakeshore on the 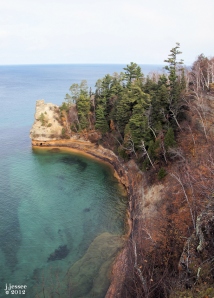 Upper Peninsula of Michigan.  You can see red-orange sandstone that is 500 million years old in the photo on the right.  This cliff has been beautifully sculpted by the waters of Lake Superior.  The interesting part is that even though the rock that makes up the landform is hundreds of millions of years old, the cliff itself that you see jutting out into the water is only a few thousands of years old.  No landform around this area could be older than 12,000 years old because that’s when glaciers retreated at the end of the last ice age.  But this land is rising.  It has risen far enough up since then, and been sculpted by the forces of erosion, to give us a spectacular view of rock formations that used to be buried.

So as my husband and I are visiting this most scenic of places, this snow bunting is pick pick picking at bits of something along a gravel road, letting me get closer and closer with my camera.

He must have just arrived from more northerly climes, smartly getting busy eating as many seeds and insects that he can before the coming winter.  Snow buntings spend the summer in Alaska and northern Canada and before winter fly to the Midwest of America, southern Canada, and the coastlines of Alaska.  Males have darker heads in the winter and more black on their wings, like this little guy.

I know all this about snow buntings now because I have my handy birding books around me.  But when I was taking the photos I thought maybe it was a sparrow of some kind.  To my delight, when I finally got home and looked it up I found out it was a snow bunting which is not a sparrow.  I would have never recognized it because the one I saw in Prudhoe Bay was in it’s June breeding plumage which is mostly white.  Moral of the story:  take at least one birding book with you on your road trip!

Chipmunks at Athabasca Falls (not a bird to be seen)

My husband and I are presently traveling from the north of the United States – Alaska – to the south of it – North Carolina.  I have gotten some unbelievable photographs of wildlife, including a close encounter with a grizzly bear that was digging up roots alongside the Alaska Highway (you can see them here).

Jasper and Banff National Parks in Alberta, Canada were spectacular.  Surrounded by sunlit mountains, we drove

through the parks with our mouths agape, peaks above us and streams meandering through valleys below us.  And though we saw barely a creature but tourist’s dogs in the parks, I did catch a few up close photos of scurrying chipmunks at Athabasca Falls in Jasper.

Canadians definitely have their national parks figured out, if these two are representations of them as a whole.

Athabasca Falls had wooden stairways interspersed between towering rocks – sometimes you have to duck to or go single-file to get through.  Lots of concrete walkways

in different viewpoints of the falls, accessed by sun dappled paths with views of game trails through the moss.  A peaceful and necessary stop, and in our case at least, not too crowded.

The only large wild mammal we saw in the parks was Bighorn Sheep.  A group of 6 or 7 were nibbling something on the rocks (my husband says they were ingesting minerals from the rocks).  The chipmunks were also nibbling, moving with rocket speed over the concrete and moss, not too scared of us big hulking humans except perhaps to be caught underfoot.

So, no birds this time.  The only ones I’ve managed to capture with my camera are swans and ravens, back up in the Yukon Territory.  But that’s a post for another day.   Until then, best wishes to you all…