The sun came out just long enough for me to shoot a vole (with my camera, that is!) 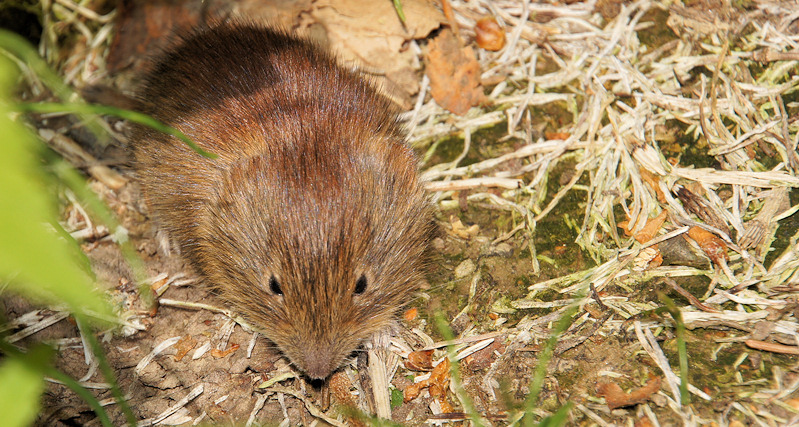 Interior Alaska is having a big vole year!  This should mean large populations of birds that prey on them right?  Like owls and falcons.  I’m seeing a Merlin falcon around our house every couple of days, and if this vole thought he was safe just sitting right out in the open like this one did yesterday, then the falcons will have a successful season.  Maybe he was curious of me, or more probably he thought he was being sly by not moving.  And for the poor eyes of humans, unlike falcons, we will often be fooled.

Nearly every woman I know wrinkles her nose when voles are mentioned.  But I think they’re adorable.  Not quite as cute as the typical mouse, but close.  Though maybe the ladies are right to be suspect – voles have lots of parasites and can even infect humans with the protozoan Giardia.  They are also notorious for eating garden plants and ruining whole crops.  They might be able to turn me against them if they start finding an appetite for the precious cabbage or squash seedlings I doted on from seed, and that are now in the garden trying to adjust to rain, cold and wind.  (Then again, moose eat my cabbages every fall and I still love them.)

I’m quite sure this is a northern red-backed vole.  Apparently they live only about a year but multiply quickly because they start reproducing as early as 8 weeks old. Gestation length is 3 weeks, each litter can number from 2-11, and one female can have up to 6 litters in one year!

If you’re wondering how big (or little) he is, my estimation is 3 inches long.  The green on the ground next to him is moss growth because of a wet spring, and we’re seeing the make up of a scant bit of organic matter on the silty ground.  So he is tiny.  In the photo below, you can see that his little front paw blends perfectly with the dead grass.  And perhaps evolution has dictated he have a red back to blend in with the orange-ish dead leaves on the floor of the forests that he inhabits. 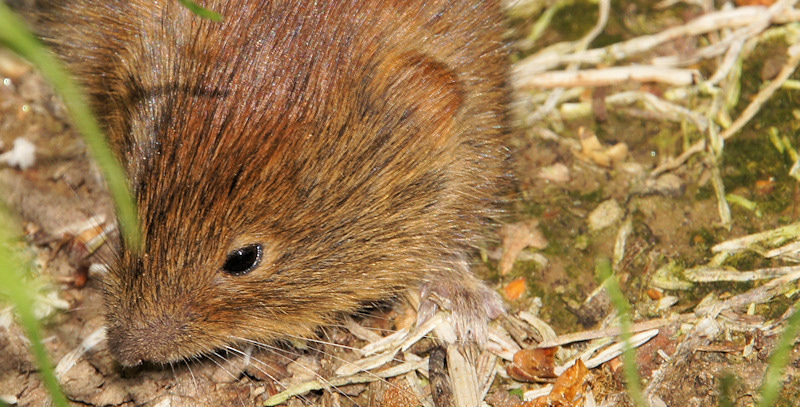 Thanks for reading and here’s to hoping we get some well-deserved sunny hot weather in Fairbanks really soon!

A Merlin Hits our Window 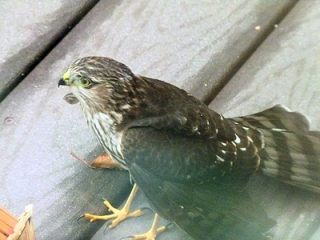 I was only a few feet from the window when this Merlin flew into it with a jarring thud.  As you an see, he is quite stunned in the first photo.  Poor guy.  He’s about a foot long, a pretty small falcon.  At first I thought he was an American Kestrel since I had never seen a Merlin.  Didn’t even know they were in interior Alaska.

This one is either a female or a juvenile (or both).  No doubt he was drawn to the multitudes of Juncos and Chickadees at our feeder (actually in the summer we don’t use a feeder but just put sunflower seed hearts on the deck railing so they don’t gorge themselves).  So this little guy was hunting our lovely resident birds, hmm. 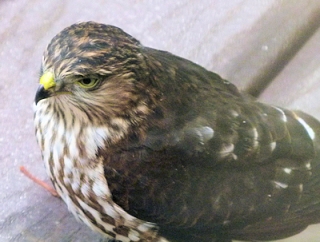 Turns out the Taiga Merlin is quite common in Alaska and Canada and their populations are stable.  There is also the Prairie Merlin that is increasing in number – apparently it’s getting quite used to city life where it overwinters, feeding on rodents and birds.  The Black Merlin lives in the Pacific Northwest (it’s numbers are also stable).  (There is also a Eurasian Merlin that is a separate species, having ceased to interbreed with the North American Merlin at least a million years ago, and their numbers are less certain.) 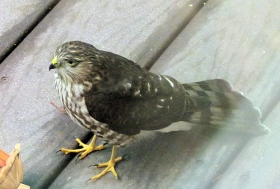 Nearly all of Alaska’s Merlins migrate.  They may winter in North America or South America, often along coastlines feeding on shorebirds.  No vegetarian meals for this carnivore – the smallest thing it eats are perhaps dragonflies plucked from the air as it’s soaring over the trees during migration. 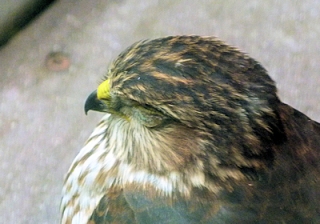 The Merlin is a tough little falcon, it will attack anything and teams up with its mate to cooperatively hunt.  It even takes birds larger than itself, like pigeons; it is known as a “pigeon hawk” in many areas.

Instead of tedious nest-building Merlins use old crow or magpie nests, or they make due with a cliff outcropping or scrape in the gravel.  The female lays 3 to 6 eggs and sits on them for a month, both feed the little ones for another month, and then the fledglings continue to beg for awhile longer. 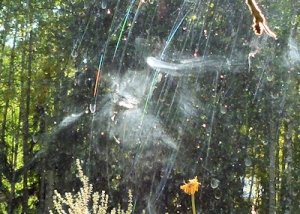 Here is a photo of the powder he left on the window.  He really hit it hard.  Many birds have a light dusting of powder all throughout their feathers.  It comes from down feathers that grow and disintegrate.  Since feathers are made of keratin that’s what the dust is made of, and it actually causes allergies in some people who keep birds indoors.  For the bird, it’s crucial to waterproofing and cleaning.

My husband and I have tried various things to prevent birds from hitting our windows, like hanging shiny objects over them, but I haven’t found anything yet that is attractive and easy to clean around (and effective for that matter).

The Merlin eventually flew up to a railing, then off into the woods.  I hope he remembers how painful our windows are so he doesn’t fly into them again.  More than just his ego was bruised I’m sure.