Reflections on the Sandhill Crane

The Sandhill Crane has a lot of personality.  From their rattling call to their long legs and red banded eyes, you can’t mistake one.  Especially given it’s statuesque 4 foot height… good thing they don’t want to get too close to us because they would probably be quite intimidating! 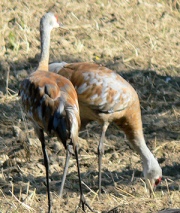 The one on the left popped up at a pond my husband and I like to visit near our house.  In May, full of mosquitoes, but an unexpected sweet birding spot.  This bird wanted us to remove ourselves quickly.  I presume it was spreading its wings in an attempt to make itself look bigger and more menacing.  It was having a private moment, who are we to interrupt!?  So we snapped a couple shots and skedaddled.  (Although I don’t know that this would be a safe place to make a nest because of neighborhood dogs or other wandering animals like foxes.)

As you can see, they have a lot of color variation, in fact their rust and gray blend is quite striking, having an almost metallic glint to it.

The photos on the right are from Creamer’s Field, an awesome place in Fairbanks to see migrating cranes, geese, and ducks.  (I’ll do a

post on it in the future.)  The pair on the right must be a parent and offspring, since the one hasn’t attained adult coloring of gray and red face.  If you want to see a short video of this pair click here, but if you do, keep an eye peeled for the Canada Geese in the background waddling through the grass.

The splendid artwork on the left was found driving through North Dakota or thereabouts, and if I remember right they were celebrating a crane festival.  Apparently, I’m not the only one who finds Sandhill Cranes to be extraordinary creatures!       —————————

Remember, you can click on any of these images to see their maximum size, and then click the “back” button to get back to this page.  And, if you need the font size to be bigger on this or any webpage, press Ctrl at the same time as the + sign.

I spotted this sunbathing beauty near Rosie Creek Trail outside of Fairbanks in August 2009.

Maybe it was migrating south.  Or maybe it was spending the last couple of days surveying its territory, waiting for a Crane Fly to wander by.  Either way, doesn’t it look more majestic than its humble 4 or 5 inches?

The Say’s Phoebe is named after Thomas Say, a naturalist who named hundreds of new species at the beginning of the 1800s.  He identified over 1,000 species of beetle alone, and over 400 other insects.  He saw and described the Say’s Phoebe during an expedition to the Rocky Mountains in 1819.

But isn’t it kind of silly to associate this enigmatic little creature to a man from the 1800s?  And what did Native Americans call the Say’s Phoebe?  … What is in a name anyway?

… Alas, we must communicate.

You might have noticed that this spruce tree has a lot of cones.  Apparently, the year after a conifer goes through a period of stress – such as drought – the tree produces a crop of cones that is much larger than normal. The dark ones are immature.

This is a Black Spruce (there are no naturally occurring pine trees in interior or northern Alaska though spruce trees are often mistaken for them).  Black Spruce is looked at with disdain by a lot of Alaskans because it represents unbuildable wetlands fraught with frost lenses and mucky tundra.

But this mucky tundra is the Say’s Phoebe’s living room for the summer.  It spends its years flying between an arctic paradise and a tropical paradise.  To the Say’s Phoebe, this fair-sized Black Spruce (12-15 feet tall) is the perfect perch for hunting mosquitos, unbuildable wetlands and all.